skip to main | skip to sidebar

http://sunilagni.wordpress.com
Posted by sunil at 10:05 AM No comments: 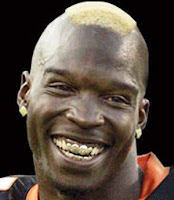 A nice article on the whole Twitter vs the NFL from the Green Bay Press. Discusses the current situation, potential problems and the future of social media in the NFL.

I found this one interesting because it talks about how pro-athletes are benefitting financially from this tool. I figured social media was a great way for the fans to interact with professional athletes. Little did I realize that a lot of the tweets contain brands and products that sponsor the athlete.

Imagine that. Signing an endorsement deal for millions of dollars, with the promise that you maintain over 50,000 followers and mention the sports drink that’s paying your bills. It could happen.

Chad Ochocinco is a pretty active Twit and likes to keep things quite confrontational with the NFL. He's known as a prima-donna and enjoys any attention he gets. But definitely a favorite just for his over-the-top touchdown celebrations and honest opinions about the NFL and its social media policy.
Posted by sunil at 10:08 PM No comments:

Lack of time and other minor commitments have prevented me from really getting into this blog. I have a bunch of ideas, with a lot of them very closely related to the MACT program.

So I think a quick reset is in order to re-focus where this blog is going and what my goals are.

Must be my sociology background kicking in but I'm finding it pretty amazing how a group of people, sports fans, have changed significantly over the last few years, let alone the past 100.

I had the chance to read "Hockey Night in Canada: Sports, Identities, and Cultural Politics" by Richard Gruneau this past summer. Discusses how the sport of hockey has influenced the identity of culture of Canadians and the many contributing factors. So not exactly communications and technology related, but it still gives a sense of how important pro-sports are to a country.

New tools like Twitter, Facebook and UStream are bringing pro-athletes even closer to fans. These fans in turn are beginning to develop their own methods of getting involved with the game and gaining knowledge that isn't provided by large institutions such as broadcast media.

I'm still undecided if this will be my final research project but it's a great way for me to apply what I learn to a topic that I'm very interested in.
Posted by sunil at 11:45 PM No comments:

Nothing Related to Oil City.

If this is true, this makes for an interesting social experiment. Shows how fast misinformation can spread with the development of technology.

Not exactly sports related but the spread of rumors is getting faster in the professional sporting world. Twitter is leading the charge with journalists and "insiders" using the tool to send updates.
Posted by sunil at 4:33 PM No comments:

The US Open has taken a stand against tweeting as they believe confidential information could possibly be relayed back to sport gambling agencies.

"Many of you will have Twitter accounts in order for your fans to follow you and to become more engaged in you and the sport - and this is great," the notices read. "However popular it is, it is important to warn you of some of the dangers posted by Twittering as it relates to the Tennis Anti-Corruption Program Rules." - (Canoe.ca, By Howard Fendrich, THE ASSOCIATED PRESS)

I guess if a player sees another player attending to an injury, the information could be sent out to sport bookies and other people who could benefit from that information.

The NFL has also sent out a warning to any players using Twitter.

The plays and strategies that teams come up with can win and lose games. Sharing any of this information could be very detrimental to a teams success.

"They fear opponents might gain a competitive advantage from even the briefest tweet about injuries, personnel decisions, trick plays or food. The Chargers allow players to tweet, but fined cornerback Antonio Cromartie US$2,500 for using Twitter to complain about training camp chow."

I think it's fair to expect more and more of this. Professional athletes can connect to fans without any regulations. The teams who pay their salaries do have a right to step in but how much is too much?
Posted by sunil at 10:51 PM No comments: 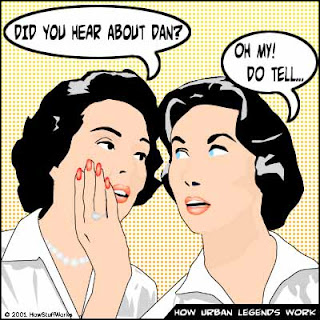 Here in Oil City, player trades, contract negotiations and player performance are the most popular topics for fans. Who might go where, how much money a player might want and potential line-ups for the next game can often be heard at coliseums and bars.

Rumors and speculation have proven to be very important to professional sports. It gives fans something to talk about when a game isn’t going on and stay connected to the sport. It generates interest and keeps things exciting for the fans.

"It is part of selling the game. I think rumors are good for the game because they create interest." - Glen Sather, former Edmonton Oilers general manager (National Post, Fri Jan 14 2000)

Where does the rumor begin?

Professional writers working for media outlets are usually close to the day-to-day operations of sports teams and events. They tend to have some sources within the league and get to witness things happen. Quite often though, these writers need to start the speculation to sell papers and themselves. If all they did was report on what they saw, they’d be out of a job. They have to provide more than that, which often results in farfetched guesses. For example, if a player misses a practice session with his team, it could be speculated that he’s hurt, when really, he could be attending a family event.

Professional teams have also been guilty of starting rumors. Why? It can help motivate a player to play better.

"A player reads a rumor in the paper that he is going to be traded, so all of a sudden his game picks up. [Vaclav Prospal, Ottawa Senator player] was brutal until the stories came out that he was going to be traded, and all of a sudden he is playing a lot better." - Glen Sather, former Edmonton Oilers general manager (National Post, Fri Jan 14 2000)

Professional sports agents, who represent players in contract negotiations like to spit in the rumor mill as well. They may want to create the perception that their client is in high-demand by other professional teams.

Fans take this information, analyze it, discuss it and share it. Along the way, the information is susceptible to some distortion. With new forms of social media, this information not only travels faster, but it now comes from even more sources.
Posted by sunil at 10:39 PM No comments: